Ben, Most People Would Turn You Away... 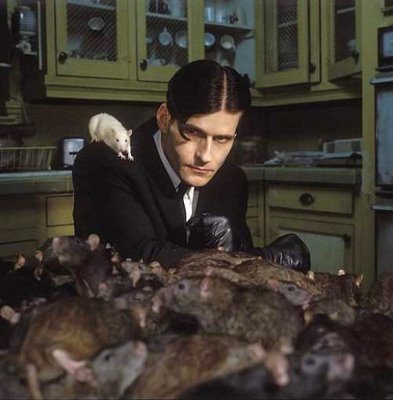 Crispin Glover is one bizarre dude. Thrust into the mainstream with the Back To The Future movies and many appearances on David Letterman, he is anything but mainstream. He was in a sleeper movie called Willard in 2003, a remake of a movie with the same name in 1971. I'm not sure if I would recommend the movie because it's not for everyone. I liked it and I like him. It's about a lonely guy who befriends the rats in his mother's basement. During the end credits of this movie, Crispin covers Michael Jackson's song Ben. As far as I know, this song has not appeared on a cd anywhere. This is from the DVD.

When I first got a DVD player a couple of years ago, the Willard remake was one of the first DVDs that I bought. It's a great flick.

Have you ever seen the VIDEO that accompanies his remake/cover of this song.

It will leave you Crispin-speechless!

Sortly after back to the future was released he put out an album with barnes and barnes called the big problem does not equal the solution, the solution equals let it be. It is truly amazing. I have a copy that needs to be uploaded and hopefully I will find time to do that soon.

You have to see the video:
http://www.youtube.com/watch?v=YTKNahASSDI

It's also on the Willard DVD, including a commentary track for the video by Crispin Glover that is a performance in itself.

I have a copy of "Ben" - the information states that it is from a 2003 album "Willard". Also have the "Big Problem..." album. His version of "These Boots Are Made For Walking" needs to be heard. I can understand why some people would run screaming from the room, but hey, what better way to sort out those you would rather associate with. If you need any of his songs uploaded let me know and I shall oblige