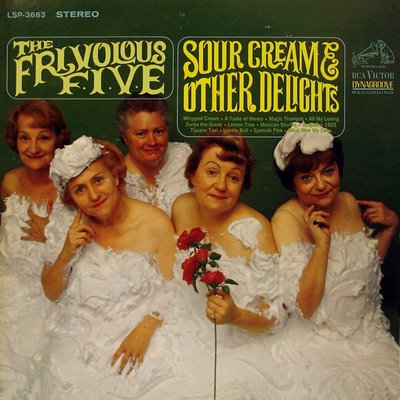 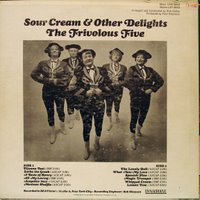 You want the best? You got the best! The greatest album in the world... Sour Cream & Other Delights by The Frivolous Five. There were many requests for the entire album, so here it is. Enjoy. Anyone out there know some info on this band? Were they really the ladies on the cover or studio musicians? I only ask because on some tracks you can hear the gals talking...

The ZIP link appears not to be working.

It says posted later today is why I should think. This site is without a doubt the best I have seen anywhere on this stupid net, what vision! Keep it up!!

Thanks a bundle for uploading my request.

He doesn't know it yet, but you've just made my son the happiest four-year-old in all the world. He's already fascinated by the covers of "Spanish Flea" and "Tijuana Taxi" (songs he was already familiar with), and the way they sort of slowly drift out of tune after about the first minute or so.

He's going to be thrilled. Thanks again!

LOVE it! Thank you for posting "The Complete Sour Creme". Those little old ladies remind me of those that would show up on Jack Benny's TV specials....usually part of his 'fan-club'. Can just see his 'deer-in-the-headlights' look at the camera as they the Frivolous Five played. Thanks again!

I seem to be the only one disappointed that this tgurns out to be some Herb Alpert clone and not the dear old ladies on the cover singing these songs!

Never could resist the classics. For those that need it:
Artist: The Frivolous Five
Title: Sour Cream & Other Delights
Date: 1966
Side 1
Tijuana Taxi
Zorba the Greek
a Taste of Honey
All My Loving
Acapulco
Mexican Shuffle
Side 2
The Lonely Bull
What Now My Love
Spanish Flea
Magic Trumpet
Whipped Cream
Lemon Tree

I actually totally love this, and I want to thank you for it. The cover intrigued me when a friend showed it to me, and I wanted to hear it. I think it's a wonderful album with a delightfully leisurely Spanish flavour to it. It's a pity the Five are not better known. I really love this album!

The ladies on the cover really are the musicians. They were all experienced musicians, having played in assorted dance bands in the 30s, 40s, and 50s. The ringleader was tenor sax player Peggy Gilbert, who continued to play a wailin' tenor until well into her 90s. She died a couple of years ago at age 102. She noted with irony how she made a lot more $$ for playing badly (w/ the Frivolous Five) than she ever had for playing well. This record notwithstanding, their main gimmick was parodying the Dixieland revival bands that had become popular in the mid-60s. (For non-musicians: It's a lot harder to play badly in such a way that everyone gets the joke than it is to play it straight.)

Great!!! and thank you for the presentation of the "Sour Cream" - basically I was looking for "Cecilia und die Sauerkrauts" and their opus "Sauerkraut Wurst and other delights" inspite of beeing in german language its a french production.

and for those of you crazy enough for covers, look out for Soul Asylum´s "Crab Dip and other Delights"