Star Wars : The Empire Strikes Back : Read Along 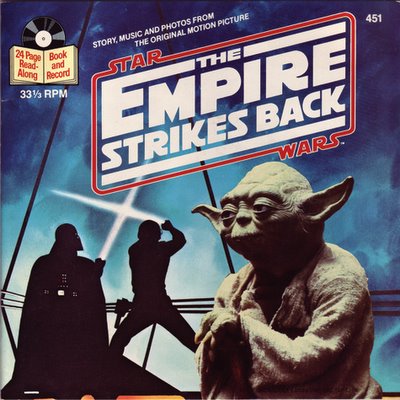 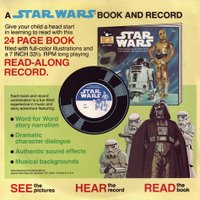 This is another rip for you. Buena Vista Records read-along version of Star Wars - The Empire Strikes Back. 7" : 33 1/3 RPM. Sometimes the voice over guy almost sounds like he's trying to talk while having the dry-heavs. I'll be posting The Return of the Jedi in a few days. Someday I want to scan in these books.

THE EMPIRE STRIKES BACK :: READ-ALONG BOOK AND RECORD

It is truly amazing what you can find on the internet. I was just rummaging through my old stuff recovered from my parents house before they put it up for sale. My 7 year old son and I found my old hand drawn comic strip that goes along with this Star Wars Read-Along book and tape. I have long since lost the tape but still had the paper comic I created and was able to project on the wall with a light bulb and a magnifying glass. Thank you to the one who posted these .mp3 files. I plan on re-marrying them to digital scans of my original comic strip so Adam and I can play them together like they originally were back in the early eighties. Very Cool.

I grew up with these but in audio cassette format. Wow, what great memories. Just when I thought I had all but lost touch with these jewels of audio delight, you go and surprise me like this! Thank you for re-upping these. Great find!