Up Next :: Batman Television Soundtrack 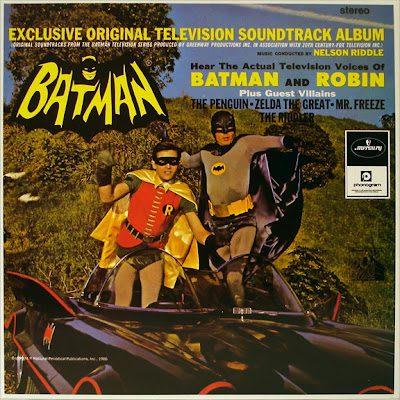 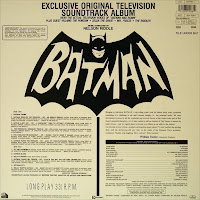 Here is the 1966 Soundtrack to the Batman television show starring my main-man Adam West. If Shatner should rule the world, Adam West should be his right-hand-man. We need this show on DVD, or at least on TV again. I can't find it anywhere. This is a great album with awesome sound bytes.

Posted by brainwerk at 5:38 PM

Weird - is this a British pressing or a reissue? The original LP has pictures from the show on the back cover where the Batman logo is on yours.

I see in the top right corner of the back cover scan it says UK.
Dave

THE BATERANG OF LIFE HAS COME AROUND AND LANDED ON MY COMPUTER MEMORY. THANKS FOR THIS GREAT LP.

Thanks for sharing this, it's pretty darn sweet.

I loved this album, much thanks

Cat woman is the green gal on that star trek episode.
Thanks for the rip...

Thank you very much.
V/R,
JB

batman is seen on the hub a cable and satelite channel