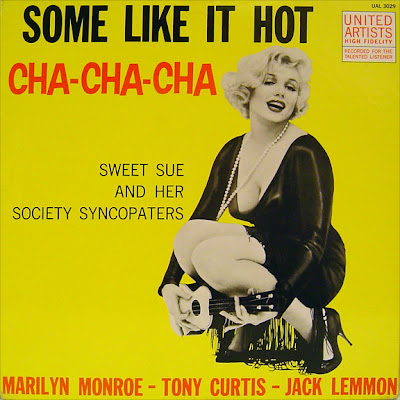 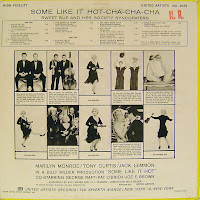 Better late than never eh? Here it is. Some Like It Hot Cha-Cha-Cha. Unfortunately Maryln Monroe does not sing on this one. It is Sweet Sue and Her Society Syncopaters. The cover (and back) are priceless. Was this a soundtrack or just someone cashing in on the movie?

SWEET SUE AND HER SOCIETY SYNCOPATERS :: SOME LIKE IT CHA-CHA-CHA

OR DOWNLOAD FROM MEGAUPLOAD
Posted by brainwerk at 4:43 PM

Do you have that Sebastian Cabot album? I used to have that back in high school, I remember finding it at a "Cut-Corner" Record Store in Cincinnati. Odd album, as I recall. Also a "David Jones" album before he was a Monkee would be great to hear again. Can't wait for "Some Like It Hot!"

OK I GIVE UP. WHERE IS THE LINK?
I AM SOO SORRY TO BOTHER YOU.

They will be up Friday. Sorry for the delay.

I made some google search and found few informations... It seems it was the orchestra used in the movie, and it may be a promo or a rare official lp...
So you could say it's a kind of soundtrack trying to make money on it... ;)

Fantastic album....One of the "Swankiest Albums" I've ever heard...Thanks for the post......