Christmas At The MASH 4077th 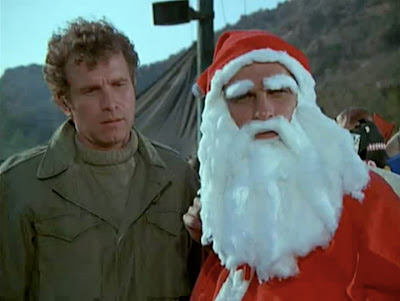 There were multiple Christmas episodes of MASH but I think I like this one best. It comes as just the twelveth episode of the entire series. Hawkeye is going to play Santa for a bunch of local kids when he gets the word that there are injured GIs pinned down just 20 miles away. Next comes that famous shot of him being lowered from a helecopter into a fox hole with his Santa suite on. The episode takes place at Christmas but there really aren't a lot of Christmas references. Its the first episode where he writes home to his dad and narrates most of the episode.

Posted by brainwerk at 2:32 AM

Thanks for all the awesome soundbytes. So glad you chose to do more this year. These are must have files for the Holiday season..