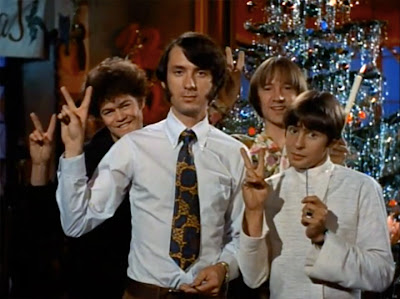 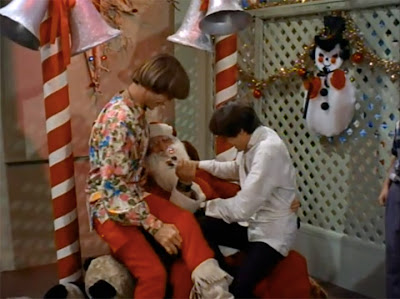 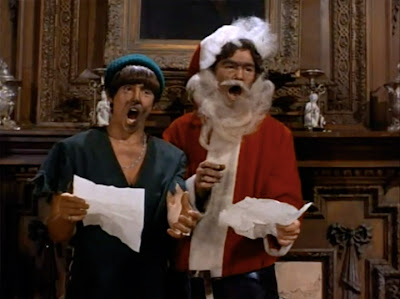 Hi everyone. Let's get this party started shall we? I'd first like to do a re-post. The Monkees' soundbytes I posted last Christmas sounded a little hollow... I don't know what happened, but they didn't sound as good as the other show's soundbytes. Being how this is one of my favorite Christmas shows, I just had to do them over. That and the fact that my brother was making a Monkees Christmas Mix and he wanted them to sound better... Anywho... Below is the original post with the eleven new sounds. I also put them in a play list so the page doesn't have to load all of those different players.

Today's soundbytes are from The Monkees episode creatively name The Christmas Show. It's about the prefab four being hired to watch young Butch Patrick (Eddie Munster) over the holidays. The little brat doesn't believe in Christmas spirit and the boys do everything they can to help him find it. They have no luck at all until they realize they have only shown him superficial things and not peace and love. This one is for all you closet Monkees fans out there. I know there's a lot of us. They were a huge influence on The Beatles you know...


Here is the cover we made for our Monkees Christmas mix. Turned out pretty cool. What do you think? Feel free to use it if you make your own Monkees Christmas Mix or send me a message and I'll get you a higher resolution version. 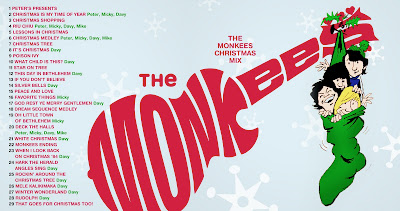 Posted by brainwerk at 1:18 PM

i would love to give this to someone as part of their christmas gift...your cover is wonderful...are these soundbites intersperced with music? is there any way you can send me a zip file of the entire thing?????? your blog is wonderful. thanks

Brainwerks - Thanks yet again for all your efforts and all the fantastic soundbites and tunes. I've been lucky enough to get some of your great creations over the last few years. Now, I'm desperately trying to figure out how to get a copy of the Monkees file you created, as well as the Three Stooges Christmas soundbites. Any help in getting these would be appreciated. Happy holidays. bigjeffoh@aol.com

What an amazing work!! The cover is fantastic. Congratulations.
Every year my wife and me make together an "alternative" Xmas compilation for all our friends and relatives and your blog is one of the first I use to check to get some stuff.
Thanks again.