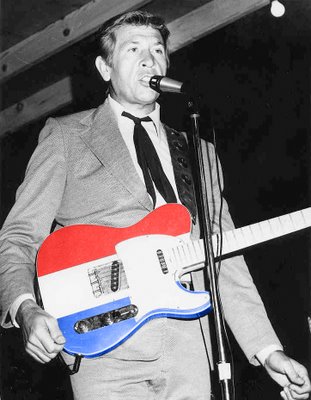 The Baron of Bakersfield is dead at 76 years old. I think he was the most underrated man in country music. Everybody loves Cash, and they should. But say you are a big fan of Buck Owens and you just may get a little chuckle. He had 15 #1 hits in a row with an unmistakable sound that could be extremely peppy or extremely depressing. I never had the pleasure to see Buck in concert and I guess I never will now. This is a real drag. I will post some of my favorite songs later, right now I'm going to mope...

"I'd like to be remembered as a guy that came along and did his music, did his best and showed up on time, clean and ready to do the job, wrote a few songs and had a hell of a time." - Buck Owens, 1992 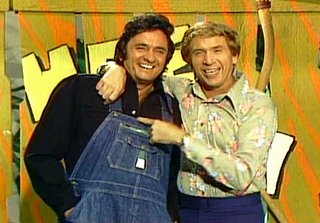 Posted by brainwerk at 8:00 AM

I saw Buck and the Bucakaroos at Busch Gardens in California in the summer of 1974. I got my picture taken with one of my early heroes Don Rich (I was 9 years old) before the show. Just a couple of weeks later he was killed in a motorcycle accident and Buck was never the same. Now Buck and Don are singing beautiful harmonies in Hillbilly Heaven.