Why Change The Cover? 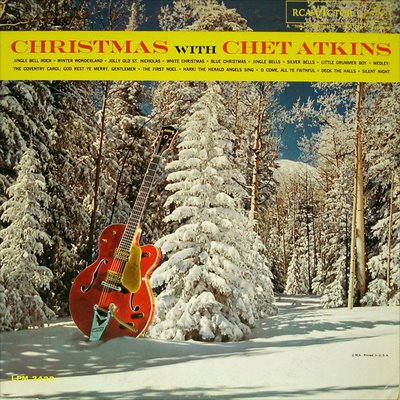 Ever wonder why they change the cover of an album when they release it on cd? This Chet Atkins cover is just soooo cool and they felt like they had to change it to this. I was almost going to post some songs from this album. It is on cd, but I've read many places that the mastering on the cd was wrong and the album sounds way better. At the last minute I decided not to. Don't want to post songs that appear on cd.
Posted by brainwerk at 12:41 PM

I agree-that lp cover is so great, and the "holiday" coloring of the Chet photo on the CD is reminiscent of when they colorize a b&w movie-it just doesn't look quite right.

Heaven forbid anything get sold these days that doesn't have the artist's face plastered on the front.

I don't know why the companies think they need to upgrade the covers when they release it on cd. I want to capture the nosstalgia of the time it was released in.

I have posted a couple of albums on my blog. Now several of the songs from albums do appear on cd's, but not together. I chose to go ahead and post the albums, because you have to hear the impact of the songs in the order they are in on the album, not spread over 20 different cd's.

I have that LP, with the guitar and trees, I was unaware of the alternate cover, and let me say, it sucks.

That's one of the LPs I inherited when my father passed away, and i will be hanging on to that for a longgggggg time!